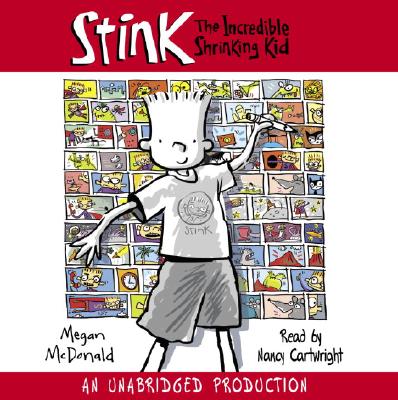 By Megan McDonald, Nancy Cartwright (Read by)
$16.00
Email or call for price

Every morning, Judy measures Stink, and it's always the same: 3 feet, 8 inches tall. Stink feels like even the class newt is growing faster than he is. Then one day, the ruler reads--3 feet, 7 and three-quarter inches! Can it be? Is Stink shrinking? Stink tries everything to look like he's growing, but wearing up-and-down stripes and spiking his hair don't seem to be fooling anybody into thinking he's taller. What would James Madison, Stink's hero (and the shortest person to ever serve as President of the United States) do?

MEGAN MCDONALD is the author of the popular and award-winning series starring Judy Moody. She says, "Once, while I was visiting a class full of Judy Moody readers, the kids, many with spiked hair a la Judy's little brother, chanted 'Stink! Stink! Stink! Stink! Stink!' as I entered the room. In that moment, I knew that Stink had to have a book all his own." McDonald lives with her husband in Sebastopol, California, with two dogs, two horse, and fifteen wild turkeys.