Radical Inclusion: What the Post-9/11 World Should Have Taught Us about Leadership (Hardcover) 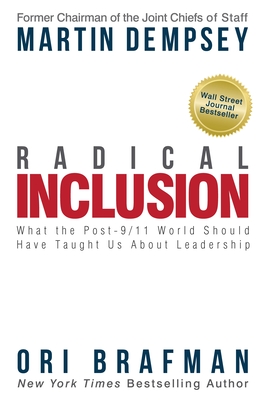 A WALL STREET JOURNAL BEST-SELLING BOOK NAMED BY THE WASHINGTON POST AS ONE OF THE 11 LEADERSHIP BOOKS TO READ IN 2018 Radical Inclusion: What the Post-9/11 World Should Have Taught Us About Leadership examines today's leadership landscape and describes the change it demands of leaders. Dempsey and Brafman persuasively explain that today's leaders are in competition for the trust and confidence of those they lead more than ever before. They assert that the nature of power is changing and should not be measured by degree of control alone. They offer principles for adaptation and bring them to life with examples from business, academia, government, and the military. In building their argument, Dempsey and Brafman introduce several concepts that illuminate both the vulnerability and the opportunity in leading today:
The principles discussed in Radical Inclusion are memorable and the book is full of engaging stories. From a young vegan's confrontation with opponents in Berkeley to a young lieutenant's surprising visitor during the Cold War, from a reflection on the significance of Burning Man to a discussion of challenges faced in the Situation Room, Radical Inclusion will provide you with leadership tools to address real leadership challenges.

General Martin E. Dempsey, named one of the most influential leaders in the world by Time magazine (2015), recently retired after 41 years of military service. During his time in the Army, he commanded various military units including United States Central Command, where he was responsible for securing U.S. interests in the Middle East and South Asia. He served in both Operation Desert Storm and Operation Iraqi Freedom, accumulating 42 months in combat. In the past five years he served as the Chief of Staff of the U.S. Army and then as the Chairman of the Joint Chiefs of Staff. As Chairman of the Joint Chiefs of Staff he was the senior officer in the armed forces and the principal military adviser to the president of the United States. General Dempsey is a 1974 graduate of West Point and has master's degrees from Duke University in literature, from the Army Command & General Staff College in military science, and from the National War College in national security strategy. He also holds an honorary doctorate degree in law from the University of Notre Dame. In 2016 he was appointed by Queen Elizabeth II as a Knight of the British Empire. Ori Brafman is a researcher, entrepreneur, and author of three New York Times bestsellers: The Starfish and the Spider: The Unstoppable Power of Leaderless Organizations; Sway: The Irresistible Pull of Irrational Behavior; and Click: The Forces Behind How We Fully Engage with People, Work, and Everything We Do. Brafman's unique ideas on leadership, teamwork, cultural change, and innovation have been implemented by the U.S. government, Google, Microsoft, Cisco, Intel, the Chicago Bulls, Amazon, Facebook, Family Business Network, and PWC, among others. Brafman's media appearances include the New York Times, the Washington Post, ABC News, BBC, National Public Radio, CNBC, the Wall Street Journal, CNN, Fox News, C-SPAN, and AP Video. He has presented before audiences at Fortune 500 companies, the White House, NATO, YPO, Harvard Business School, and others. Brafman is a Distinguished Teaching Fellow at UC Berkeley's Haas School of Business and a Senior Fellow at the Coach K Leadership & Ethics Center at Duke University. He holds a BA from UC Berkeley and an MBA from Stanford University's Graduate School of Business.