THERE YOU ARE by Mathea Morais 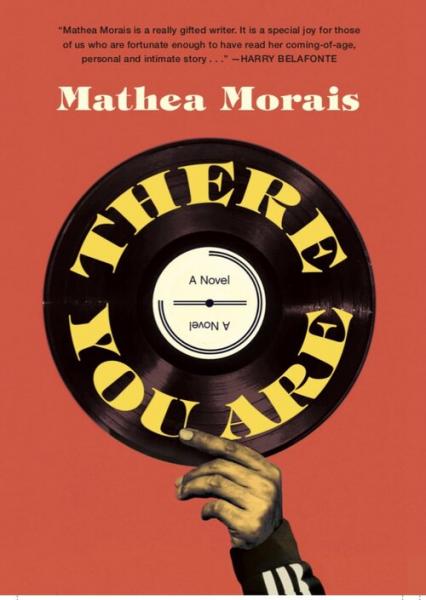 Growing up in the '80s and '90s in St. Louis, Octavian Munroe and Mina Rose found a future in music. Between the stacks at Rahsaan's Records, the two fell in love to the sounds of Prince and A Tribe Called Quest. But in the wake of grief and heartbreak, they drifted apart, ultimately leaving the city for fresh starts.

Decades later, Rahsaan's Records is closing for good. Seeking closure of their own, Octavian and Mina travel homeward, reckoning with the ghosts of the past they left behind and the uncertain future they must create.

Insightful and nostalgic, There You Are is a wise novel of love, loss, and the power of community, backed by a phenomenal soundtrack of hip hop, soul, and jazz.

Mathea Morais grew up in St. Louis and earned a degree in Literature from NYU. She began her career writing about hip hop culture and music for The Source and Trace Urban Magazine. Her work has gone on to appear in The New Engagement, Slush Pile Magazine, Arts & Ideas, and Anti-Heroin Chic. She is the Director of the Noepe Center for Literary Arts on Martha's Vineyard and has taught creative writing to children and young adults for over fifteen years. She lives with her husband, her three daughters, and a beloved dog.

Author featured in article on her position as director of the newly reopened Noepe Center for Literary Arts —Vineyard Gazette, https://vineyardgazette.com/news/2019/03/27/next-chapter-noepe-returns

"Mathea Morais is a really gifted writer. It is a special joy for those of us who are fortunate enough to have read her coming-of age, personal and intimate story of a time in St. Louis circling the death of Michael Brown." —Harry Belafonte, activist, actor, singer, author

The Brisket Chronicles: How to Barbecue, Braise, Smoke, and Cure the World's Most Epic Cut of Meat

Grill master Steven Raichlen shares more than 60 foolproof, mouthwatering recipes for preparing the tastiest, most versatile, and most beloved cut of meat in the world--outside on the grill, as well as in the kitchen.

In dozens of unbeatable tips, Raichlen shows you just how to handle, prep, and store your meat for maximum tenderness and flavor. Plus plenty more recipes that are pure comfort food, perfect for using up leftovers: Brisket Hash, Brisket Baked Beans, Bacon-Grilled Brisket Bites--or for real mind-blowing pleasure, Kettle Corn with Burnt Ends. And side dishes that are the perfect brisket accents, including slaws, salads, and sauces.

Steven Raichlen is the author of the New York Times bestselling Barbecue! Bible cookbook series, which includes the new Project Fire, Barbecue Sauces, Rubs, and Marinades; Project Smoke; The Barbecue Bible; and How to Grill. Winners of 5 James Beard awards and 3 IACP awards, his books have been translated into 17 languages. His TV shows include the public television series Steven Raichlen's Project Smoke (currently in its 3rd season); Primal Grill; and Barbecue University, and the French language series Les Incontournables du BBQ and Le Maitre du Grill. Raichlen has written for the New York Times, Esquire, and all the food magazines; he teaches sold-out Barbecue University classes at the Broadmoor in Colorado Springs. In 2015, he was inducted into the Barbecue Hall of Fame. His website is www.barbecuebible.com.

The Brisket Chronicles: How to Barbecue, Braise, Smoke, and Cure the World's Most Epic Cut of Meat (Paperback)